Spotlight: Being Intentional With Remote Work 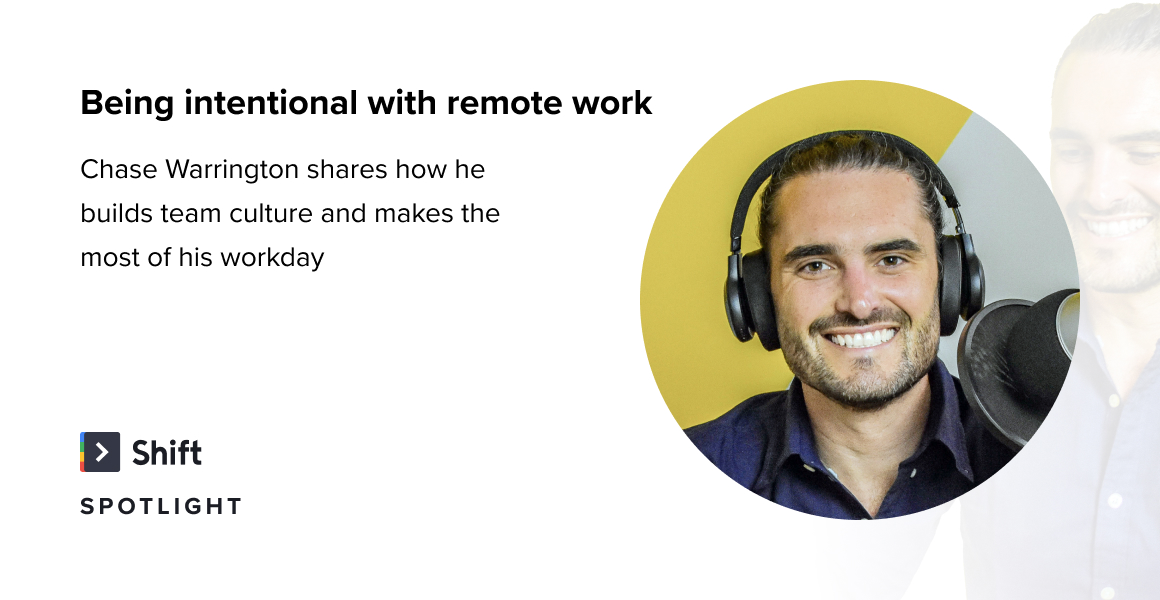 Head of Remote at Doist, Chase Warrington, shares how he builds team culture and makes the most of his workday

Chase Warrington never wanted to sit in an office. Obsessed with travel, new cultures, and adventure, in college, he’d dreamt of working and living full-time in another country. Aside from taking internships abroad, he never thought that dream would be a reality.

Now, Head of Remote at Doist, Chase is living in Spain and charged with improving the company’s remote work infrastructure. Each day he’s managing asynchronous communication, researching new technology that can better support the team, and finding new ways to humanize remote work.

“One of the reasons I’m really passionate about remote working at scale is that I had to make so many sacrifices-—in pay, career progression-—because I wasn’t going to an office. And I just don’t think that needs to be the case. I want to push remote work forward so people don’t have to make sacrifices.” 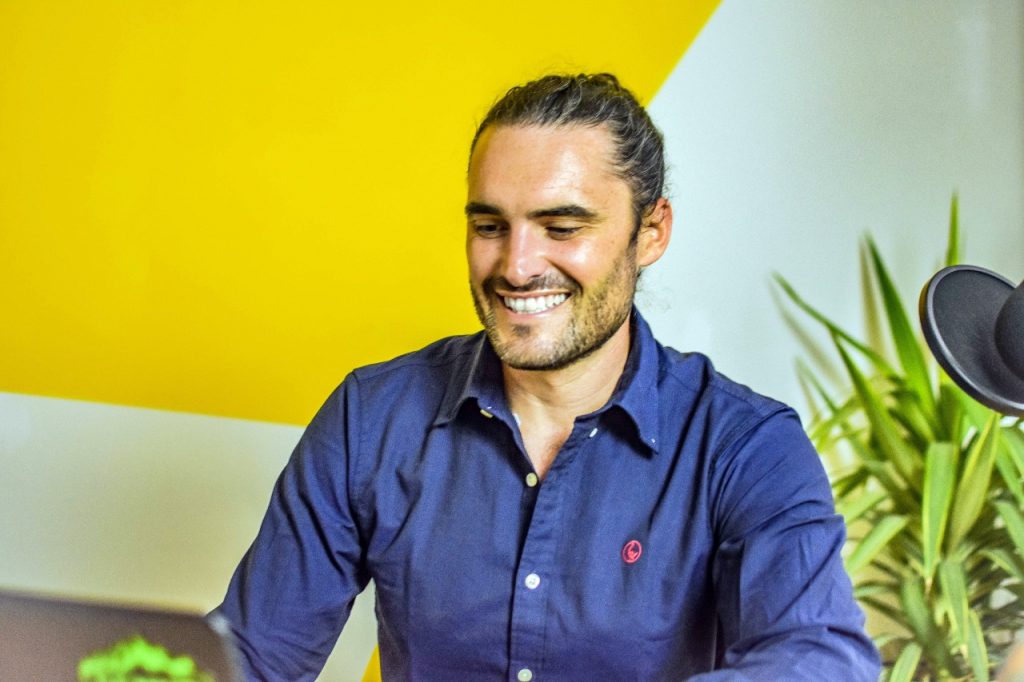 Chase graduated college thinking he was headed towards an office job and only traveling when he had time off. Trying to buy himself some time before having to work from a cubicle, Chase sought out a remote job—in 2008.

He was hired by a hybrid organization as one of their few remote employees and traveled domestically as part of his job. That satisfied his desire for travel, but only for a little while. He soon realized what he really needed was complete location independence. So Chase left his job to travel, helping his wife here and there with her e-commerce business while they lived all over the world.

After a while, Chase began to notice he wasn’t feeling fulfilled professionally, even though they were doing fine financially and living out his dream. He started looking at work options more seriously, but that process stretched over four, five, then six months—nothing was lighting him up. Nothing was offering the independence that he wanted. Even if it was the right type of role, it wasn’t in a place he’d be excited to go to work every day.

“My wife found a Pinterest blog that listed 72 jobs where you can work from anywhere. And I think 70 of them were engineering jobs. But one of them was a role at Doist, and that’s how I discovered the company.”

There was some skepticism from friends and family. Of all the companies he was interviewing with, Doist was the newest, it was established in the Bahamas, and had people working from more than fifty different locations. One friend was worried Chase was about to get scammed.

Chase understood where the skepticism was coming from. While he was blown away by the Doist team that had always worked remotely and asynchronously, the company was just out of its startup phase, operating worldwide and letting people work from wherever—seven years ago, that was unheard of.

But Chase had done his research and knew he’d found the right place for himself. He took the job leading the international marketing team with Doist and the remote, fluid workplace was everything he’d been looking for.

“Working remotely, I can change my environment based on my need for creativity, sunlight, or energy. If I was a business owner, I would want my team to have that superpower, to craft their perfect workday.” 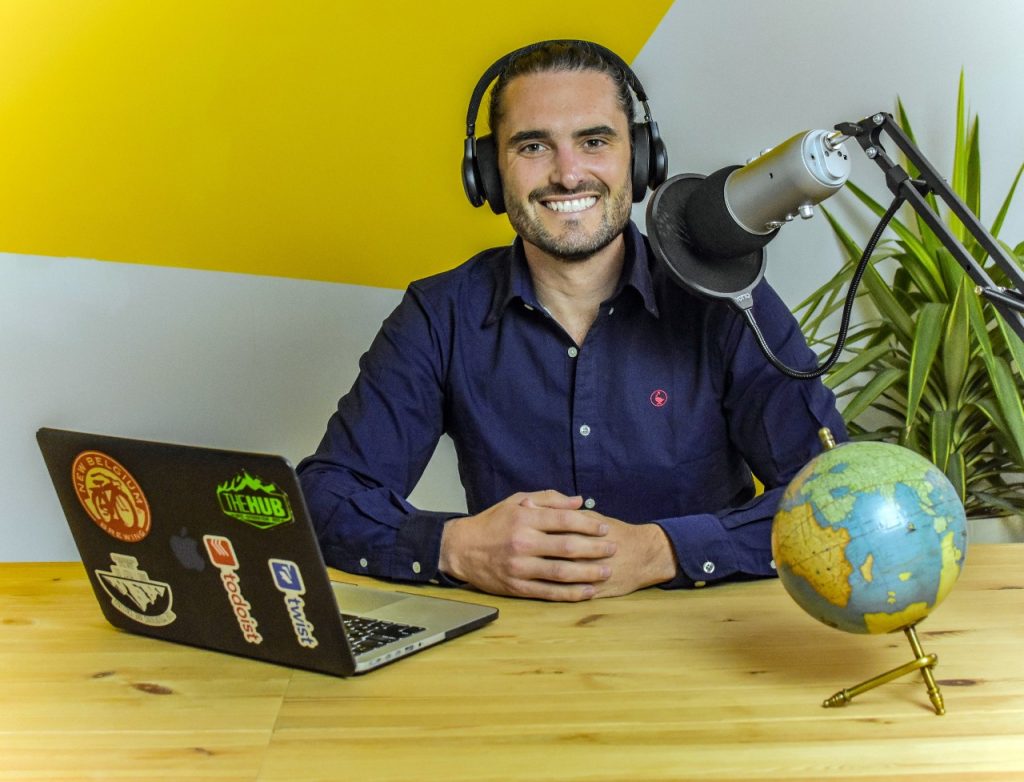 Doist has never had an office space, for fifteen years now, it has been operating with an international team of fully-remote workers. When the pandemic hit, their teams didn’t need to change to keep functioning—but what did change, was their competition.

Being one of few remote-first companies was a huge advantage from an employer branding perspective and a hiring one, especially as a company that provides productivity products like Todoist and Twist for remote teams. But, of course, all that changed with the wave of companies that came online in 2020, and all the new remote-work collaboration tools that came with it.

The team as Doist realized they couldn’t fall behind, their company needed to represent the best of what remote work could be. And they needed to be using and testing the new products and services that were emerging while leveling up some of their own MVPs. All of these factors combined led to the creation of Chase’s most recent role at Doist, Head of Remote.

Now, not only is Chase living out his dream working full-time from Spain and taking trips across Europe, but he’s responsible for pushing remote work forward, helping others be intentional with their workday, and carving a path for others.

“I’m so lucky. It’s been like a dream for me—I've been living in Spain now for over 4 years. Because of that, I've met people from all around the world and been able to call a new country home." 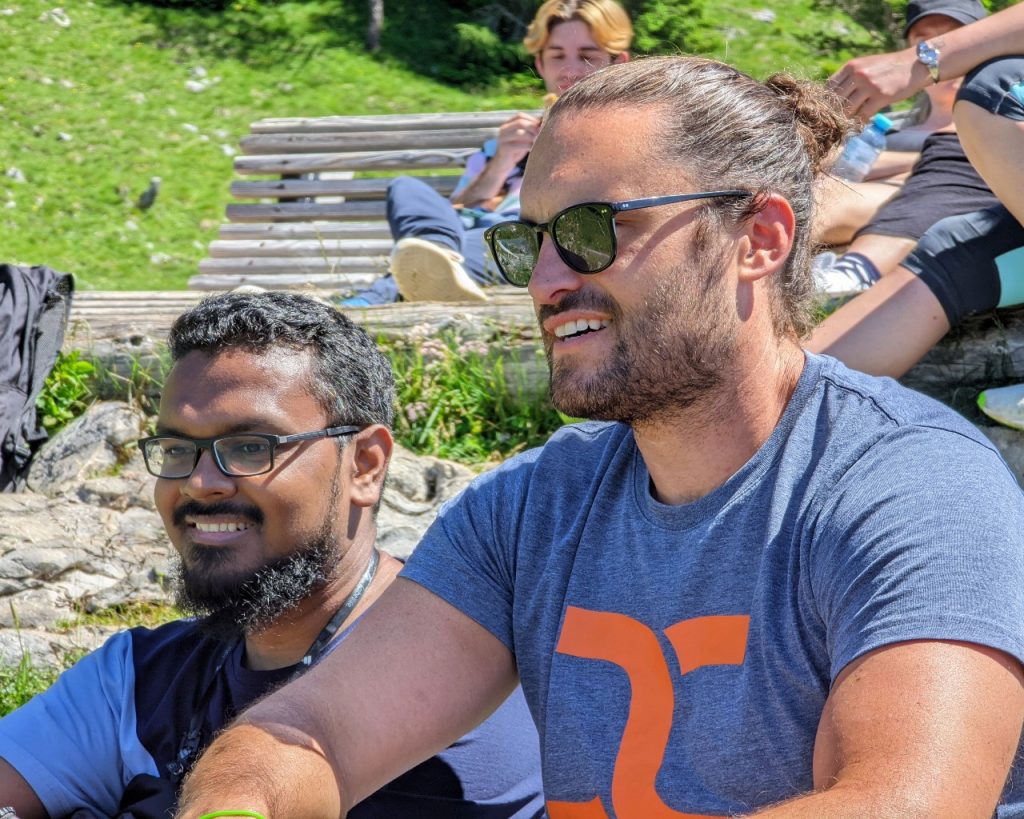 But, remote work isn’t just about taking your laptop and going to cool places. It’s about crafting what’s great for you and your life.”

Q: What are your tips for working remotely with a flexible schedule?

A: Keep a routine

At first, I would just wake up and wing my day—starting work whenever I got up, maybe working from the couch or a coffee shop. But after a bit, I realized this wasn’t sustainable. While flexibility is great, being intentional with it is super important.

I start fairly early, but I’ve structured my day the way I like it. I take a long lunch break to get some exercise and enjoy the sunlight. Breaking up my day into two halves brings me joy and it helps my creativity too.

I also schedule meetings or interviews for the afternoon when my energy is falling. At that time, I wouldn’t be as good at writing a document, but talking or having an interesting conversation comes easier.

Remote work doesn’t mean you need to go to Bali and sit on a beach to work. But it also doesn’t mean you have to close yourself up in your little office, 9-5 every day either. If you want, take your laptop out and enjoy the outdoors on a nice day or go to a coffee shop.

Q: What advice do you have for managing a remote team?

A: At Doist, we're uber asynchronous. We have very few meetings, we never do all-hands meetings. Like literally never, we've never done one.

When you're spread across all time zones and have people in 35 different countries, somebody's going to get a bad experience if you schedule a meeting, and we just don't think that's necessary. Instead, we optimize everything for asynchronous communication first. Building a remote team requires thinking through the lens of “async” for everything from what people's expectations are, to the way you document, to keeping everything in a central, transparent place that's accessible at all times.

Q: How do you cultivate work culture in a fully remote company?

A: Work culture happens a lot more organically at co-located offices, you don't have to be super intentional about it. A lot of companies thrive because of that. But a lot of companies just say they have culture because they have a monthly happy hour, or they bring in cookies on Tuesday mornings, or they have a ping pong table. Is that really culture?

Synchronous and virtual activities include casual hangouts where we pair people up and they can have a one-hour conversation. Then we have asynchronous spaces for people to connect virtually, so channels are dedicated to certain interests, like the online games that we're playing. And then we have synchronous meetups in person, and those are team mini-retreats and company retreats.

But all three of these are completely optional. We don't put any pressure on people to participate. It's not going to affect your career, there's no downside or underlying guilt or pressure. You don't get bonus points for showing up in a remote team that focuses on deliverables. But we know that we can support that work by having people connect on a more human level.

Q: Where do you see things going with remote work?

A: You can't close the Pandora's box on freedom, flexibility, and choice, These things are going to be more prevalent in the workplace than pre-pandemic. I don't think there's too much arguing with that.

A lot more teams will end up in this remote-first or location-agnostic situation. And I think ultimately, all of those experiences are going to get better with increasing competition. Our remote-first experience has been improved because of the pressure put on us to make it better.

Certainly, there will be plenty of companies that demand people come back to the office, I think that will be problematic for them. But at the same time, there are people that thrive in an office and I think we have to acknowledge that demographic exists too. But my hope is that everybody has more options, that they have more flexibility to choose, and that they're not just stuck with the office or nothing. 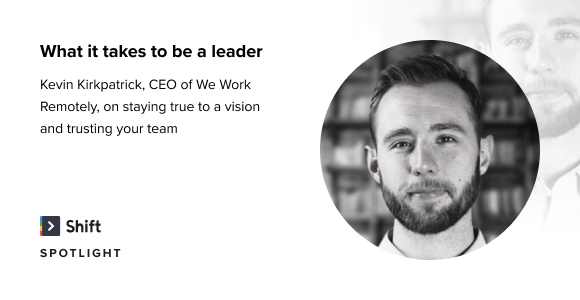 CEO Spotlight: What it Takes To Be a Leader 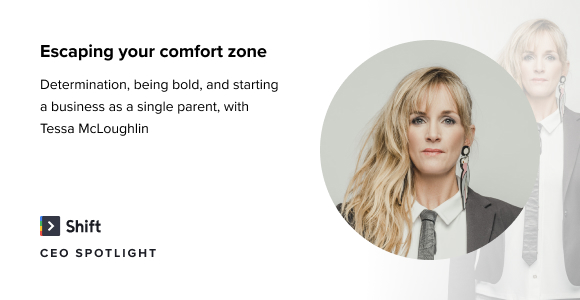