Box vs Dropbox: A Comparison of File Sharing Apps 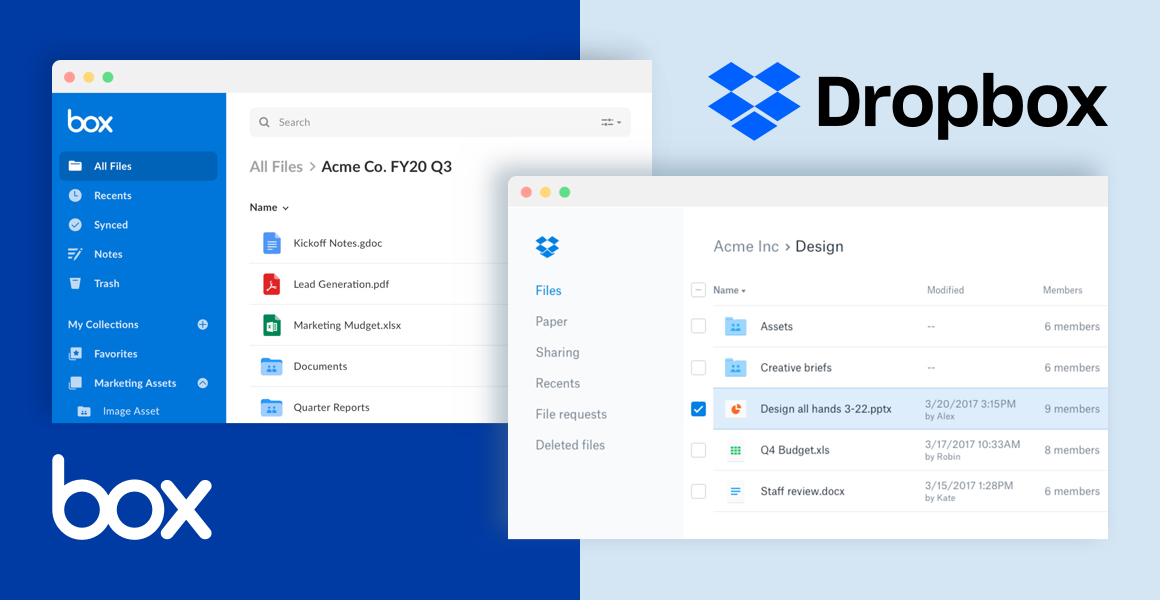 The problem of how to store files securely in the cloud has been around since files have been able to be uploaded to the cloud. Choosing the right file sharing software is essential whether you’re working from the office or building out your remote work toolkit. Two options for the best document management solutions (DMS) for secure cloud storage aimed at teams are Box and Dropbox.

If you’re looking to choose a cloud based storage solution for your team we’ve put together the pros and cons of two key contenders: Box and Dropbox. 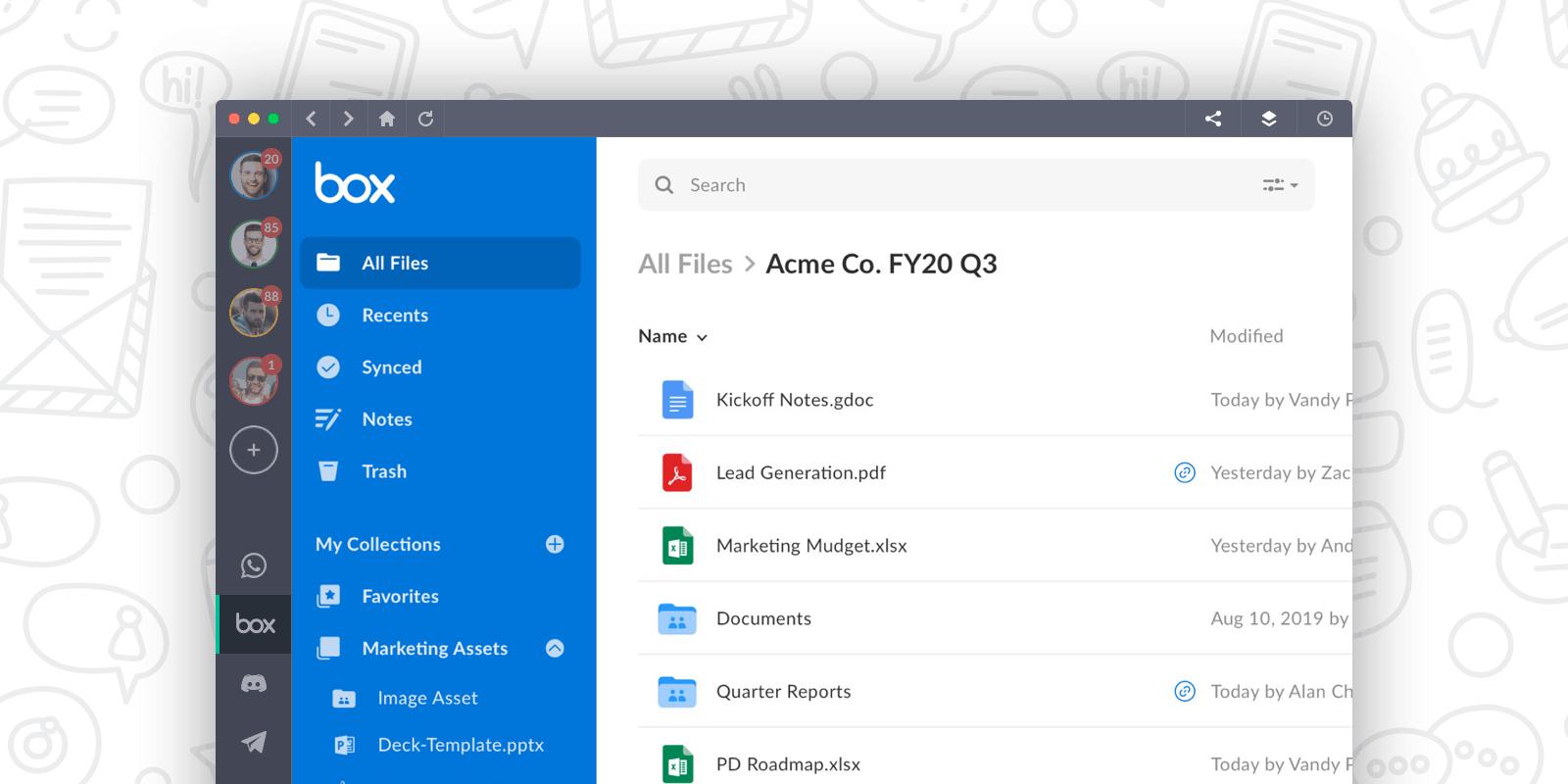 Dropbox is a file storage tool and modern digital workspace. Dropbox for Business is specifically targeted to teams who not only need secure file storage, but also a smart workspace to enable collaboration. Like Box, Dropbox also offers customizable enterprise plans. Dropbox also offers individual plans that are not positioned as a solution for team cloud-based content storage. 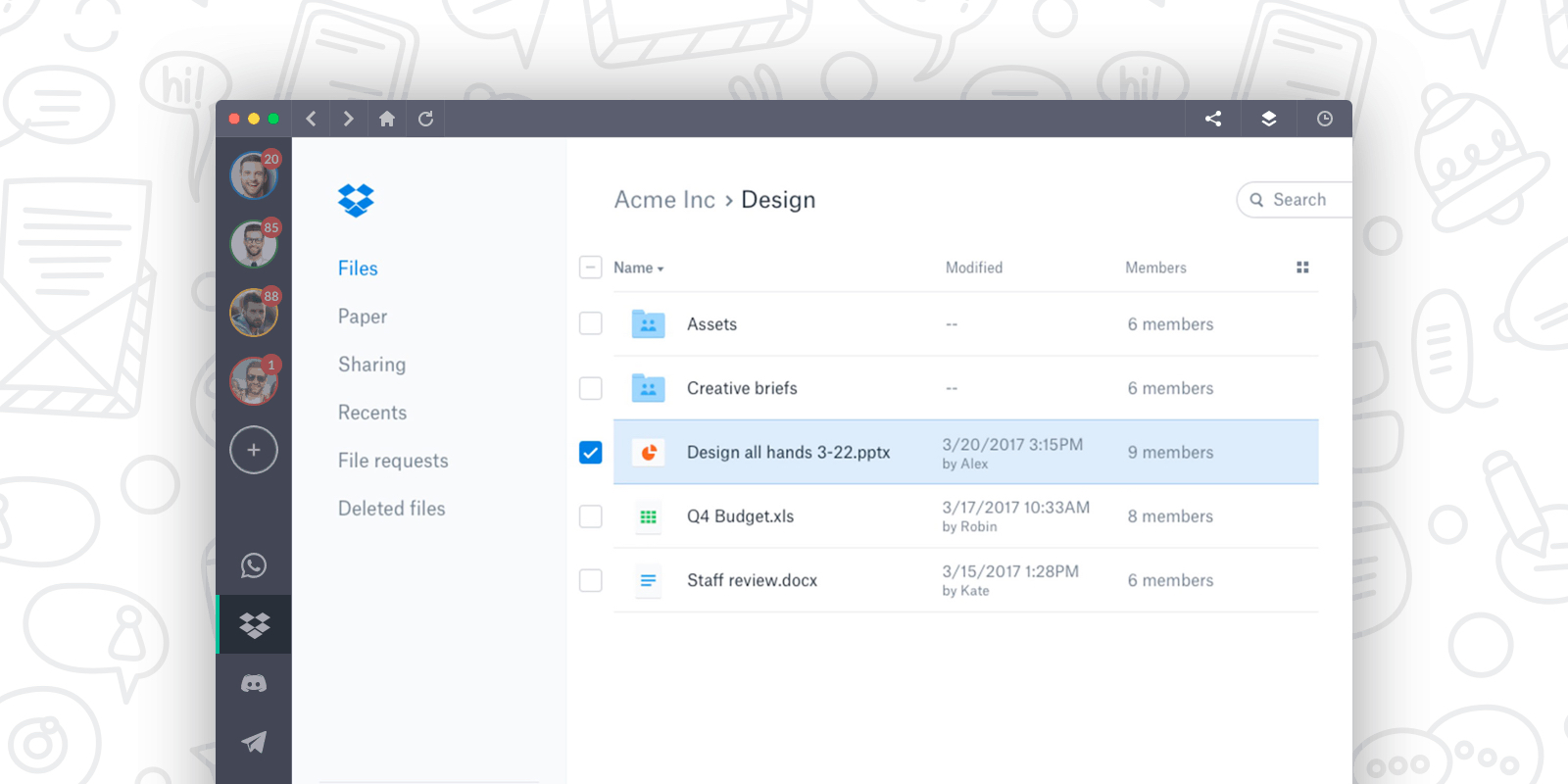 Today nearly everyone needs to use some form of a file sharing tool. Apps like Box and Dropbox are essential to view or collaborate with people within or outside of your team. Sending documents over email is clunky and hard to keep track of. File sharing apps streamline the whole process. Choosing the right file sharing tool is crucial.

We compared Box and Dropbox across 10 categories to see which option offers the best cloud-based storage solution for businesses:

Box was founded in 2005 by Aaron Levie and Dylan Smith. While a student of the University of Southern California in 2004, Levie began Box as a project for a college class. Levie dropped out of USC in 2005 to work on Box full-time. Box has always positioned itself as a primarily enterprise solution for file storage.

Dropbox was developed in 2007 by co-founder Drew Houston to solve his own file sharing issues. The software was also co-founded by Arash Ferdowsi and released in 2007. Dropbox Paper was launched in 2015 to offer an in-Dropbox solution to edit documents, share ideas, and assign tasks.

Box and Dropbox have both made deals with Microsoft to position themselves within the cloud-based storage market, although neither company is owned by Microsoft.

The Box log in and Dropbox log in are available directly in your browser. Both are also compatible with a wide variety of desktop and mobile platforms. Both are compatible with Mac and Windows. There is also a Dropbox app and Box app available for download on iOS, Android, Blackberry, and Windows Phone. Dropbox also has a Kindle Fire app. Box does not offer it’s own Linux client. Currently, the best workaround for Box users on Linux is to use Rclone.

The amount of storage for both Box and Dropbox varies depending on the plan a team has purchased. The storage tiers for Box are 100 GB for the Starter plan and unlimited storage for the Business, Business Plus, and Enterprise plans. Storage in Dropbox for Business begins at 5TB for the Standard plan and unlimited storage for the Advance and Enterprise plans. While the Standard plan for Dropbox costs three times as much as the Starter plan for Box, Dropbox’s entry level business plan offers 50 times as much storage as Box’s.

Box vs Dropbox: Ease of Use

Box offers more advanced admin and security controls, but these come at the expense of usability. There are a huge number of controls to make use of. If your company has dedicated administrative or IT personnel who can dedicate their time to setting up and running Box then it won’t be a hassle. But a small company may find Box to be cumbersome.

Dropbox is easy to download and use. The simplicity of Dropbox is an advantage for smaller companies who don’t have a large administrative or IT infrastructure. The simplicity comes at the expense of the extensive features than Box has but the essential options of security, file sharing, and cloud-based storage are all available.

Box offers Box Notes as their tool for users to collaborate in real-time. Office 365 also integrates with Box. This allows users to edit Word Documents directly within Box as long as users are also subscribed to Office 365. Box also recently implemented a new Box for G Suite integration so that users can edit and collaborate in Google Docs in real time.

Dropbox users can share documents via Dropbox Paper. Team members can give real-time feedback on documents so there is no waiting around for someone to finish edits. Dropbox seamless integrates with Microsoft. Dropbox can be accessed directly from Office 365 documents and you can edit documents directly in Dropbox.

Both Box and Dropbox pricing have multiple different levels in their structures. There is the option to set up basic individual accounts for free with both companies. Neither Box or Dropbox offer free business plans for teams. Both options do offer discounted prices for business users who bill yearly rather than monthly. Ultimately, Box offers a wider range of plans which enables users to have more flexibility in their choice.

Both companies offer customer support on Twitter. Box can be reached at the handle @BoxSupport. Dropbox is available at @DropboxSupport and has a much larger following on Twitter than Box.

Community support is also available for both Box and Dropbox. The Dropbox community is more prolific with over four times the posts of the Box community. Box doesn’t advertise the number of members in its support community but Dropbox has over one million members to help answer any question you might have.

Finally, customer support is available directly on the Box website. There is a dedicated web page where users can view Box Status updates, access user guides, and sign in to contact customer support. Dropbox also collects their available support options, including guides, the Help Center and Community, on one webpage. The addition of a vibrant Twitter support community is an excellent resource that Box just doesn’t offer.

Files stored in Box are encrypted with 256-bit Advanced Encryption Standard (AES). Additional security options available include Box Shield and Box KeySafe. Box Shield allows for the classification of files, either manually or automatically, with different levels of confidentiality and security to prevent data theft and unauthorized downloading or sharing of files. Box KeySafe is in-app encryption key management that allows businesses to manage their own encryption keys.

Data at rest in Dropbox is protected with 256-bit AES. Data in transit between Dropbox apps and servers is protected with Secure Sockets Layer (SSL)/Transport Layer Security (TLS) which enables the creation of a secure tunnel encrypted by 128-bit or higher Advanced Encryption Standard (AES). Dropbox also offers the option to use two-step verification at login. Dropbox protects files with security measures that include enabling view-only mode, preventing downloads, and enabling password protection.

Both options integrate with many of our top apps and tools. Box offers over 1400 seamless app integrations including productivity and communication favourites like Slack and Asana. Box also allows for the integration of Office 365 and G Suite. Box backs up all of their available app integrations with their high-level in-app encryption key management.

Dropbox allows for the integration of apps through Dropbox Extensions. The number of available app integrations is not advertised but offers a range of productivity, communication, and creativity apps. Teams that use Microsoft or Google can both integrate their suites with Dropbox.

The category winners were an even 50/50 split. This speaks to how Dropbox and Box each have their strengths and weaknesses when it comes to small and large teams, and ease of use compared to feature rich complexity. Box is targeted to solve large enterprise needs and that’s where it wins. Dropbox is best when smaller teams need an easy-to-use file sharing and collaboration tool. Your choice of a cloud-based document management solution will depend on the specific needs of your team. A small group who needs to quickly set up a sharing, collaboration, and storage tool will be well-served by Dropbox. A company that needs top of the line security will probably want to look at Box as their DMS of choice.

Box and Dropbox in Shift

Shift solves the problem of having to keep extra browser tabs open to access your files stored in the cloud or having to refer back to separate desktop apps. Shift also enables seamless integration in one desktop workstation with your email accounts, messaging apps, and cloud-based storage tools. Box, Dropbox, and Dropbox Paper are all supported apps in Shift. 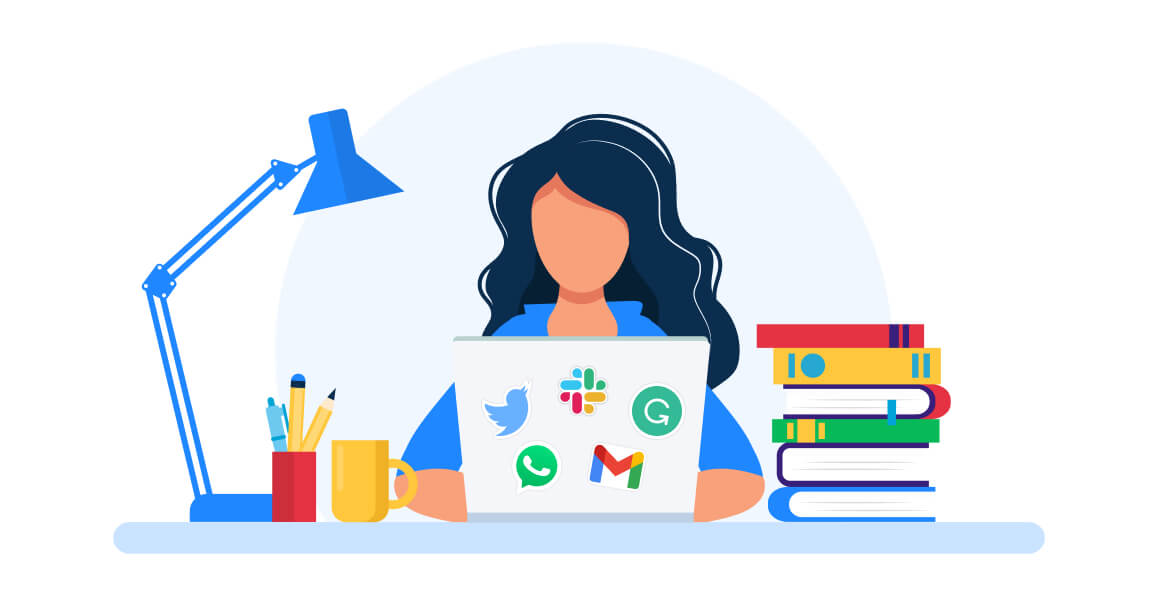 How to Organize Your Laptop for College 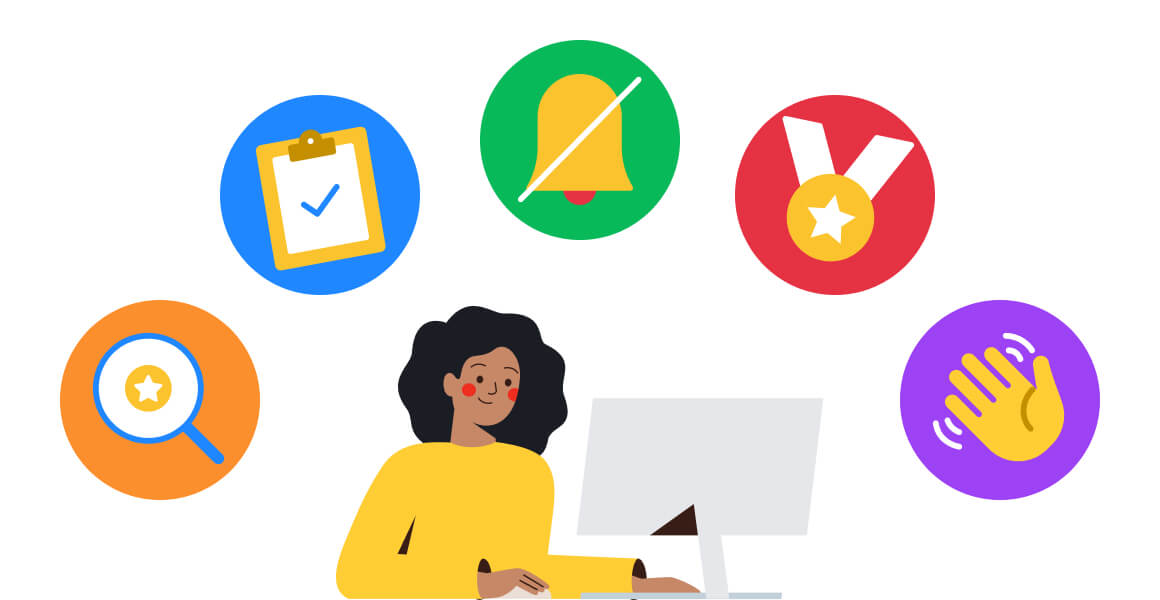 How to Curb Your Procrastination